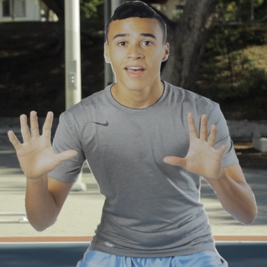 In Los Angeles County, over 5,000 people have died from firearms over the past decade.

Each year there are incidents in the LAUSD when children bring guns to school.

We co-developed and evaluated a gun violence prevention intervention for middle school youth.

Where’s Daryl? is available for other school districts and organizations to use, free of cost.

In 2012, Sentient Research partnered with the Los Angeles Unified School District (LAUSD) and the Art Center College of Design in Pasadena to produce and evaluate Where’s Daryl?, an innovative anti-gun violence prevention education program for middle school youth. Students in the Design Matters program at the Art Center used human-centered design to develop Where’s Daryl?, which was further expanded by LAUSD and Sentient Research.

Two evaluations of Where’s Daryl? with over 1,000 middle school students found significant program effects on knowledge and attitudes towards guns.

This engaging and highly interactive program follows a fictional character named Daryl who misses out on the things he loves most (birthday parties, shooting hoops, and even his first love) because he becomes involved with guns and lands in the juvenile justice system. The curriculum uses educational materials, including: humorous short videos that depict Daryl as absent from his own life milestones; art supplies and affinity items to help students create and disseminate their own personalized Where’s Daryl? messaging among their peers; and a teacher’s toolkit with gun violence facts and participatory learning activities to encourage critical thinking about guns. The program focuses on prevention and asks youth to reconsider their assumptions about guns and to discuss the negative impacts guns can have on their life and goals.

Sentient Research planned and implemented two separate evaluations of the program, which included creating survey instruments for students and teachers, analyzing program evaluation data, and producing reports with recommendations. We designed the student evaluation to assess the impact of Where’s Daryl? on outcomes such as negative attitudes toward guns, knowledge related to gun safety, and the consequences of guns in society and at school. A teacher survey measured the effectiveness of various program elements from their perspective and suggestions to improve the program.

In 2014, we analyzed data from over 700 students in four LAUSD middle schools who took a baseline survey before the program began, and a follow-up survey at the end of the program. We evaluated a second implementation of the program using the same methodology in 2015, with over 300 students. In both evaluations, overall student knowledge increased significantly from baseline to follow-up, as did negative attitudes towards guns. Teachers were overwhelmingly positive about Where’s Daryl?, and provided helpful suggestions to refine the program. Our ultimate goal is to expand Where’s Daryl? as an evidence-based intervention across the U.S. to achieve wide-scale gun violence prevention impact.