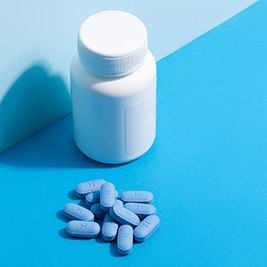 We conducted a state-wide survey to investigate PrEP awareness, attitudes, uptake, and barriers among 602 young men who have sex with men (YMSM) in California.

The Centers for Disease Control and Prevention (CDC) estimates that if current rates persist, half of all Black— and a quarter of all Latinx—gay and bisexual men could be infected with HIV in their lifetime. PrEP uses a well-established antiretroviral medication combination to block HIV infection in at-risk HIV-negative individuals. When taken as prescribed, PrEP is highly effective at preventing HIV.

In 2015, despite the availability of PrEP, awareness and uptake were low among at-risk populations. Barriers to PrEP use among YMSM needed to be better understood and addressed so the benefits of this HIV prevention strategy could be fully realized. We partnered on the study with APLA Health and Wellness, and the California HIV/AIDS Policy Research Center at UCLA. The study was funded by a grant from the University of California HIV/AIDS Research Program, with additional support from the UCLA Center for HIV, Identification, Prevention and Treatment Services (CHIPTS).

Sentient Research conducted an online survey to examine levels of PrEP awareness, current use, likelihood of future use, and attitudes and barriers to PrEP uptake among YMSM. Individuals were eligible if they were HIV negative, a California resident, 18–29 years of age, and MSM. YMSM were recruited through ads on several geosocial networking apps and websites. Given the disproportionate impact of HIV among Black and Latinx YMSM, this study focused specifically on outcomes for these groups in comparison to their White counterparts.

The study uncovered important barriers to PrEP uptake including concerns about cost, lack of health insurance, not knowing where to access PrEP, concerns about side effects, and stigma.

Most respondents had favorable attitudes toward PrEP. However, the study uncovered several important barriers. These included concerns about cost, lack of health insurance, not knowing where to access PrEP, concerns about side effects, and stigma surrounding taking PrEP. These barriers were nearly all higher among Black and Latinx MSM.

Based on the findings of the study, our report, Addressing PrEP Disparities among Young Gay and Bisexual Men in California, made the following set of recommendations: